This post will cover a deep dive on how to make arroz con leche with cooked rice. It's super simple to make and will have you wanting to make it again as soon as it's gone!

Arroz con leche, also known as rice pudding, is a popular breakfast staple in latino and hispanic cultures. It's especially popular and frequently made during the winter and chillier months. Think of it as a stick-to-your bones kind of meal, just like oatmeal.

This recipe was inspired by my Mexican heritage. I grew up eating a lot of arroz con leche as a kid and still love it to this day. Every warm bowl puts a smile on my face and brings me back to the days my Ita (grandma) and Lelo (grandpa) would babysit me.

I wanted to make this recipe unique and swapped out using condensed milk for cream of coconut. It added the right amount of sweetness and hint of coconut flavoring.

Here are a few other delicious recipes inspired by my heritage that may interest you: Mexican Dessert Bars and my Abuelita Hot Chocolate Brownies.

Below, you'll find the list of ingredients that you'll want to gather ahead of time.

When to serve arroz con leche

This dish can be served as breakfast or as a dessert. It's best when served warm.

Here are a few substitutions you can use and still achieve an equally delicious recipe.

What toppings can I use?

Below are a few topping recommendations if you opt to add any.

The only equipment you'll really need is a rice cooker.

Cook your rice ahead of time. I like to cook mine the day before. This allows some time for a bit of the moisture to be released and for the rice to not get too soggy when added to the milk.

What if I don't have any cream of coconut?

You can use a can of condensed milk instead, which is what is traditionally used. Start with half a can and add more to taste. 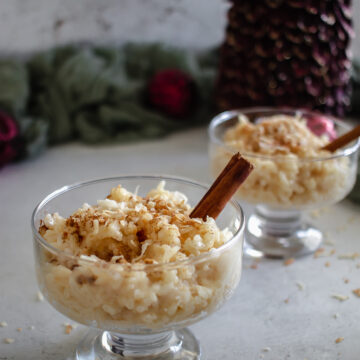