Nothing screams fall is here more than the smell of apples and warm spices. That's exactly what you get with this apple cider bundt cake.

Not only is this apple cider bundt cake pleasant to look at but it smells like you're walking through an apple orchard in the fall. The taste? Just imagine enjoying apple cider donuts in cake form. The texture is dense and moist like a warm slice of pound cake. There are also apple chunks sprinkled throughout the cake. I opted to peel mine for this but you can leave the skin on if preferred. The whole-wheat flour in this recipe adds a unique and inviting taste. It is honestly hard to stop at just one slice!

This time of year is always so special to me. It's the air getting a bit more chilly, the leaves turning colors, the chunky sweaters and boots, all the fun baking, and it's the pumpkin spice lattes that signal fall is here.

Things to note about the ingredients

I know the ingredient list may seem a little daunting but most of the ingredients are ones that you already have in your pantry. Some that you may not have on hand would be the apple cider and whole wheat flour. The cinnamon sugar mix is completely optional. I opted to sprinkle some over the apple cider glaze more for aesthetic purposes. I highly recommend making the accompanying glaze. You'll already have a bottle of apple cider open, so why not?

Why do you use whole wheat flour in this recipe?

This is what gives the cake that apple cider donut taste to it. It adds a nice, nutty flavor.

If you don't already have a bundt pan, Amazon has some great options with different price ranges. 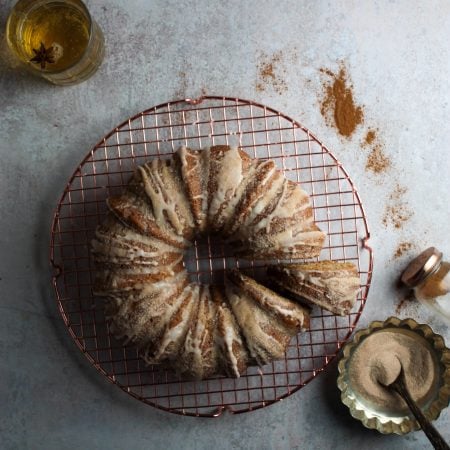 This cake has bits of apple in it and is topped off with an apple cider glaze, then sprinkled with cinnamon and sugar. Enjoy this cake all throughout the fall season!
Print Recipe Pin Recipe
Prep Time 15 mins
Cook Time 50 mins
Total Time 1 hr 5 mins
Course Dessert
Cuisine American
Servings 14